Cape Cleveland is a significant geographical feature on the Townsville skyline, forming the eastern edge of Cleveland Bay. It is some 15 kms long and 6 kms wide, rising to 560 metres at Mt. Cleveland.

On the 6th June 1770, James Cook in the “Endeavour” viewed the coastline from some 10kms out to sea.  He named the Cape almost certainly because it reminded him of his home county of Cleveland (literally ‘cliff-land’) in northern England.

In 1819 Captain Phillip Parker King was commanded to survey those regions of the Australian coastline, which had not been completed by Matthew Flinders.  He sailed in the  “Mermaid” and was accompanied by Allan Cunningham, botanist. A copy of King’s narrative for the period can be read here. 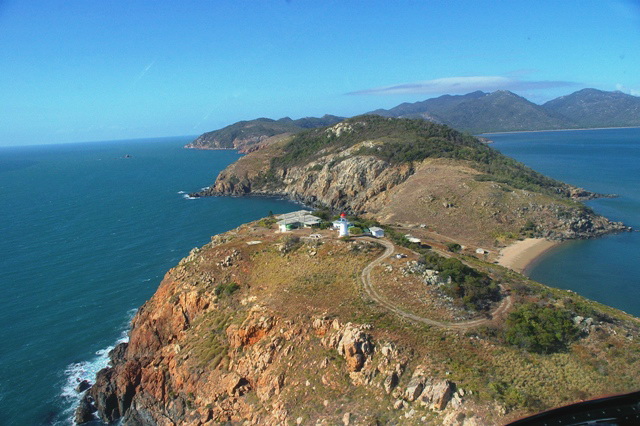 They anchored just off Cape Cleveland on 14th June 1819, and then in Red Rock Bay just to the west of the Cape from the 15th to 17th. The anchorage was to the right of the photo above, and landings would have been in the bays along the coastline.  The opportunity was taken to replenish their supplies of water and wood as a survey showed both were readily available.

Cunningham was able to make several collecting trips, and his collections included at least four “type” specimens, or newly described plants. A “type” specimen is the official preserved specimen, lodged with a herbarium, which is used to provide the official description of the species. It is also used as the standard to compare this species with other related species.

One of the type specimens was Acacia simsii which is now recognized as common throughout central and north-eastern Queensland and the top end of the Northern Territory. Another was Acacia humifusa, a somewhat less common plant but one which has a certain appeal with its unusual phyllodes or leaves. Cape Cleveland is the southern limit of this species. Cunningham also collected Corchorus hygrophilus, a small herb which is considered a rare plant of our region.

A number of species common along the tropical coast were also collected, such as Erythrina vespertilio, Tabernaemontana orientalis, Eustrephus latifolius, Araucaria cunninghamii, Alyxia ruscifolia and Clerodendrum floribundum. In all, the records show 83 species were collected, many of which would no doubt have been extensions of known habitat. For more details see this page.