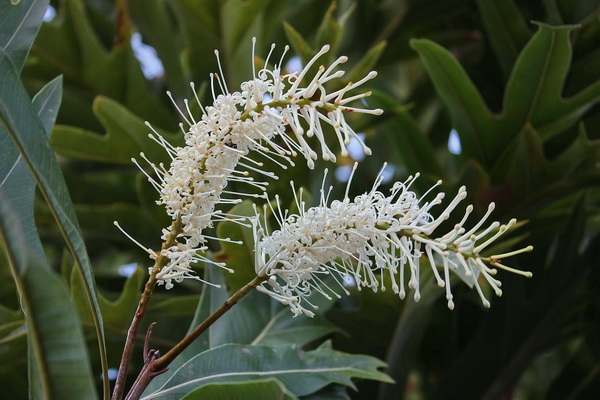 Notes on the Name

Well, the genus Helicia was described in 1790 and in 1865 Ferdinand von Mueller decided that the specimen in front of him collected by Dallachy from Rockingham Bay (which is in general the Cardwell to Tully area) belonged to the genus Helicia and so he named it Helicia darlingiana after Sir Charles Darling, the Governor of Victoria. It was quite common in those days to recognise patrons, actual or hopeful, maybe some would call it a form of bribe or thank you for services rendered. Think of a current example of Gossia.

Then later Mueller  described the genus Darlingia as being distinct from that of Helicia, on the basis of the number of ovules and differences in leaves. It would appear that either he had forgotten he had already described it as a Helicia or he wanted to give it a more appropriate name because the inflorescence really stood out. It can be spectacular. So he published the name Darlingia spectatissima validly in the Journal of Botany, British and Foreign. I don’t know what specimen he used for this name as he doesn’t indicate it in the publication, but later that year he published it again but based this time on the specimen of Dallachy’s according to Lawrie Johnson. This second publication was in the Fragmenta Vol 5 page 152, so this meant the one specimen collected by Dallachy, now had two names and the second one was the same as one already used. Hence the second one is considered to be illegitimate as it is superfluous.

Now the the Rules of Botanical Nomenclature enter the picture. The Rules state “that the earliest validly published name must be used” etc etc. Hence the name ‘darlingiana’ had to be used and the person who recognised this and made this transfer was the late Lawrie Johnson from the Sydney Herbarium. Thus the valid name for this species reads with the authority as Darlingia darlingiana (F.Muell.) L.A.S.Johnson. This indicates that Mueller gave the name ‘darlingiana’ and Johnson transferred it to the genus Darlingia. The authority is the key to the literature referring to the name of the species.

The Govt. Botanist of Queensland F. Manson Bailey in 1899, used the name ‘spectatissima’ and described two varieties, one of which is now known as Darlingia ferruginea, ‘Ferruginea’ being the varietal name given by Bailey.

Just to add a little background to the above, members will recall that John asked in the last newsletter if anyone could give an explanation of how this name came about. I thought I would try to find out but I’m afraid the intricacies of nomenclature defeated me – hence the great explanation above by Betsy. It is interesting however to note some of the history behind this.

Charles Darling was appointed Governor of Victoria in 1863. Ferdinand von Mueller had been Victorian Govt. Botanist since 1853. John Dallachy was appointed Superintendent of the Botanic Gardens in 1849, but in 1857 Mueller was appointed Director, and Dallachy, Curator with a reduction in salary from £400 to £300. Despite this their friendship appeared to endure as Dallachy continued to collect for Mueller. In 1864, reportedly at Mueller’s request, he joined Dalrymple’s expedition to set up a settlement at Rockingham Bay, and in fact settled in the Cardwell area with his family and continued to collect for the Victorian herbarium.

Ferdinand von Mueller was an extremely prolific taxonomist and was responsible for many papers and publications naming at least eight hundred Australian plants. Rather than repeat details here a good description of his works is available at http://en.wikipedia.org/wiki/Ferdinand_von_Mueller