An extract from: Narrative of a Survey of the Intertropical and Western Coasts of Australia 1818-1822 by Phillip Parker King 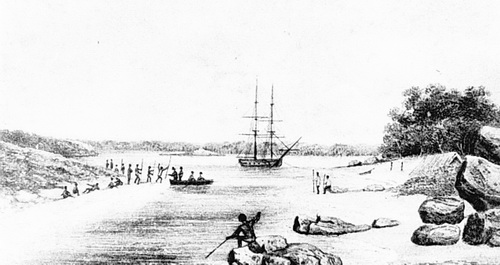 June 13 1819
At daylight of the 13th we passed within four miles of the extremity of Cape Bowling-green, which, although it is very low and sandy, is not destitute of wood or verdure; between Cape Bowling-green and the back mountainous ranges, a distance of nearly thirty miles, the country appears to rise gradually, and gave us reason to regret that the nature of my instructions did not warrant our making a more particular examination of this part of the coast, for it appears to offer a much greater degree of interest and importance than any part of the southward without the tropic. Indeed, this bay appeared to be equally promising in its appearance with those near Mount Upstart; and the peculiar feature of Cape Bowling-green, jutting out into the sea between them, considerably increases the probability of there being more than one or two rivers of importance hereabouts. The barren range, which has almost uninterruptedly continued from the back of Cape Palmerston, a distance of 150 miles, here ceases or retires, and leaves a gap of ten or twelve miles wide of low land; to the North-West of which, Mount Eliot, a hill of considerable height, rises rather abruptly; and, as the shores of the bay were not distinctly traced, there is fair reason for presuming that there is a river at its bottom.

June 14 1819
The next morning we steered round Cape Cleveland and passed close to some straggling rocks on a reef that extends for four miles to the eastward of it.

Cape Cleveland is the extremity of a mountainous projection, and like Mount Upstart rises abruptly from low land, by which it is separated from the lofty range of Mount Eliot. The wooded and uneven character of the land on its west side indicated so great a likelihood of our finding fresh water that I was induced to despatch Mr. Bedwell to the shore to ascertain whether a delay might be made profitable by completing our hold with wood and water. His return bringing a favourable report, the cutter was anchored in three fathoms, at about one mile from the extremity of the Cape, bearing North 60 1/2 degrees East.

June 14 to 15 1819
Wooding and watering parties immediately commenced operations, which occupied them that and the following day.

June 15 1819
On the afternoon of the second day, I landed with Mr. Cunningham and Mr. Roe to ascend one of the hills that overlooks the bay. After two hours’ climbing over huge rounded masses of granite, and penetrating through thick bushes of underwood, we arrived only at a summit considerably beneath the one we wished to reach; but as it was too late in the day to proceed further we halted; and I took a set of angles and made some memorandums for the sketch of the bay. A remarkable observation was here made upon the magnetic influence of this land; the variation was observed to be 10 degrees 32 minutes West, but on removing the compass eight yards off, it only gave 2 degrees 50 minutes East. This in some degree corresponds with Captain Cook’s record of the irregularity of his compass when he passed near this part of the coast, in consequence of which he called the peaked island to the westward of the cape, Magnetical Island: this irregularity, however, was not noticed by me in my observations near the same spot; and the difference observed by him may very probably have been occasioned by the ship’s local attraction, which in those days was unknown. The view obtained from this station was neither so useful nor so extensive as I had expected: the coast for six miles back is low and occupied by a large body of water; beyond which is a range of flat-topped and precipitous rocky hills that appear to be inaccessible, and to form almost an impenetrable barrier between the sea-coast and the interior. From the hazy state of the atmosphere the Palm Islands were not visible: sunset being near at hand we were obliged to hasten our descent, which, by following the course of a torrent-worn gully, proved to be much shorter and easier than, from our rugged and difficult ascent, we were led to apprehend.

At the bottom of the hill the small stream that was trickling down the gully, by which we descended, joined another of larger size running over the beach into the sea, at about a quarter of a mile to the southward of that from which we watered. At the junction of these streams we discovered a native path winding among the high grass, which speedily brought us to our boat.

June 16 1819
We remained at the anchorage the following day in order to obtain some lunar distances; and in the evening Mr. Bedwell sounded across the bay towards the south end of Magnetical Island, and also the channel between that island and the main. The soundings therefore laid down are from his report, from which it appears that there is a good and clear passage through, and excellent anchorage upon a muddy bottom all over the bay.

No natives were seen during our visit, but the remains of nine huts were counted in different parts of the bay, near the edge of the beach. The inhabitants were not however far off, for the tracks of human feet as well as those of a dog were noticed very recently imprinted on the gravelly bed of the fresh-water stream; and we were probably watched by them in all our proceedings. Near the extremity of the Cape some bamboo was picked up, and also a fresh green coconut that appeared to have been lately tapped for the milk. Heaps of pumice-stone were also noticed upon the beach; not any of this production, however, had been met with floating.

Hitherto, no coconut trees have been found on this continent; although so great a portion of it is within the tropic and its north-east coast so near to islands on which this fruit is abundant. Captain Cook imagined that the husk of one, which his second Lieutenant, Mr. Gore, picked up at Endeavour River, and which was covered with barnacles, came from the Terra del Espiritu Santo of Quiros;* but, from the prevailing winds, it would appear more likely to have been drifted from New Caledonia, which island at that time was unknown to him; the fresh appearance of the coconut seen by us renders, however, even this conclusion doubtful; Captain Flinders also found one as far to the south as Shoal-water Bay.**
(*Footnote. Hawkesworth volume 3 page 164.)
(**Footnote. Flinders volume 2 page 49.)

Several kangaroos were started by our wooding party but none were taken. In the gullies Mr. Cunningham reaped an excellent harvest, both of seeds and plants.

Here as well as at every other place that we had landed upon within the tropic, the air is crowded with a species of butterfly, a great many of which were taken. It is doubtless the same species as that which Captain Cook remarks as so plentiful in Thirsty Sound; he says, “we found also an incredible number of butterflies, so that for the space of three or four acres, the air was so crowded with them, that millions were to be seen in every direction, at the same time, that every branch and twig were covered with others that were not upon the wing.”* The numbers seen by us were indeed incredible; the stem of every grass-tree (Xanthorrhoea) which plant grows abundantly upon the hills, was covered with them, and on their taking wing the air appeared, as it were, in perfect motion.
(*Footnote. Hawkesworth volume 3 page 125.)

It is a new species, and is described by my friend Mr. W.S. Macleay, in the Appendix, under the name of Euploea hamata.

June 17 1819
On the 17th we left the bay and passed round the north end of Magnetical Island. Several natives were seen on a sandy beach at the north end, where deep gullies indicated the presence of fresh water. Our course was then directed across Halifax Bay towards the Palm Islands, passing inside a small rocky islet marked i, on the chart, and another of larger size, k. In a South by East direction from these islands is an opening in the land round which the sea was observed to trend; it was supposed to communicate with the water seen from the heights of Cape Cleveland over the land at the bottom of the bay; and it is probable, from the mist which this morning occupied a considerable space of the low land fronting the hills, that a large body of water exists there. Calms and light airs detained us until two o’clock, when a fresh breeze sprung up from the eastward, to which we made sail, but the glare of the sun, shining in the direction of our course, obliged our hauling up to avoid the risk of running thus dark with excess of bright upon any rocks or shoals that might be in our way; and as the low coastline of this part of the bar was distinctly traced, we steered towards the island marked 2, near which the cutter was anchored, at eight o’clock, in eleven fathoms mud. 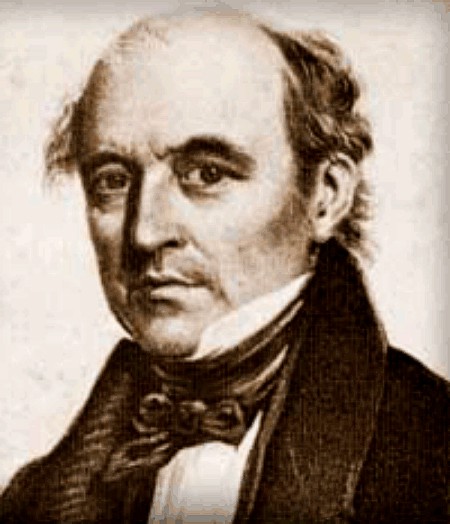