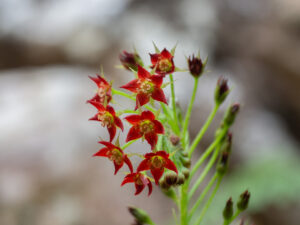 While Australia is home to 117 species of sundew, representing about 50% of all recorded species, the centre of that diversity is southern Western Australia. Atlas of Living Australia lists 21 species in Queensland; three of these are endemic to rain forests of North Queensland and have very limited distributions.

D. adelae is only found in the hills behind Rockingham Bay and on Hinchinbrook Is. It is listed as “Near threatened”. I found large patches of this species along the banks of a rainforest stream north of Ingham, photo below.

In early November, the plants were flowering, with the flower heads showing a characteristic unfurling growth.

The leaves are much larger than those of other common Drosera spp that are found near Townsville. They have “tentacles” on their upper surfaces but all except newest leaves seem to lack the sticky “dew” – perhaps washed off by the high rainfall. Rain being one predictable hazard of rainforest life, it has been suggested that D. schizandra, which lives in one of the wettest locations in Australia, may be abandoning carnivory.

In spite of its “near threatened” status, D. adelae is apparently easy to grow if one can maintain high humidity and a diet of tiny flies, and it is widely cultivated by carnivorous plants enthusiasts.