The flowers of Abelmoschus moschatus, very familiar as our group’s logo, are currently making a bright show on hillsides around Townsville, prompting nomination as our Plant of the Month.

These plants were almost invisible during our prolonged dry season but their hardy underground tubers (below) survive in a dormant state. They quickly sprout new growth with the onset of the wet season and have an impressive ability to find their own space amidst dense clusters of native grasses.

The local wild form of this species is a low-growing, trailing plant with usually watermelon-pink flowers. Its prolific flowering habit makes it an attractive addition to a sunny garden or large pot.

A different variety, also attractive but not of local provenance, can be seen in some Townsville gardens. It has taller, more erect stems and somewhat darker red flowers and was sold previously as a ‘native’ species. The true provenance of the more erect/red variety remains unknown.

The bright red fruit of Vitex melicopea, usually appearing during February in our region, make it easier to spot this otherwise rather elusive tree.

More information is available on our species page for Vitex melicopea.

In celebration of the New Year we have a double feature this month!

Brunoniella acaulis and Curculigo ensifolia are fairly inconspicuous small plants until their bright flowers emerge. Then they prompt questions: what species is that?

These are often among the first plants to flower after rain. Both species are flowering now, mid-January 2020, at Clevedon, a fortunate location that received very localised rain recently while Townsville remained dry.

When its fruits mature, typically during December in our area, Mallotus nesophilus provides an extremely attractive display.

An inconvenient detail: Mallotus nesophilus has separate male and female trees and these cannot be differentiated until they flower. To ensure future displays of showy fruit, one would need space to plant multiple specimens. 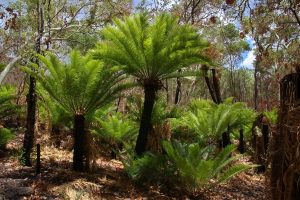 Cycas media stands out among our fire-tolerant native species, being one of the quickest to refoliate in a scorched area. These cycads can put on new leaves in spectacular fashion after a dry season bushfire, as shown in the image above, taken recently at Clevedon.

The images below, taken in previous years, show the appearance of Cycas media after a few months of rainfall.

Although slow-growing, Cycas media can be an attractive and hardy garden feature plant. Be aware that all parts of the plant are considered poisonous. For more details see our Cycas media species page.

Amidst the dry bush around Townsville at this time of year, the large golden-yellow flowers of Cochlospermum gillivraei stand out on its temporarily bare branches.

In times past, fibre from our native kapok trees would have been useful for soft padding and for fire-lighting.