Originally planted as an arboretum, the collections are developing with a strong emphasis on native and dry tropical plants. Anderson Botanic Gardens include fine specimens of tropical trees, palms, cycads and pandans, with the world’s largest public collections of Australian Pandanus displayed.

Other specialist collections are the Cape York Peninsula Collection, the Australian Tropical Rainforest, Tropical Orchard, and a developing collection of regional flora, and the contrast of a Conservatory housing bromeliads, aroids, orchids and lush tropical understorey plants.

The original land for Anderson Park was acquired from the Water and Electricity Supply Depatment in 1929. Much of that land is now Mundingburra State School (including the original Thuringowa well), road reserve, and the Jubilee Bowls Club.  Most of the existing land was acquired between 1956 and 1963 as land acquisitions
and was named in appreciation of the work of William Anderson (1845-1935), City of Townsville’s first Curator of Parks (1878-1934). 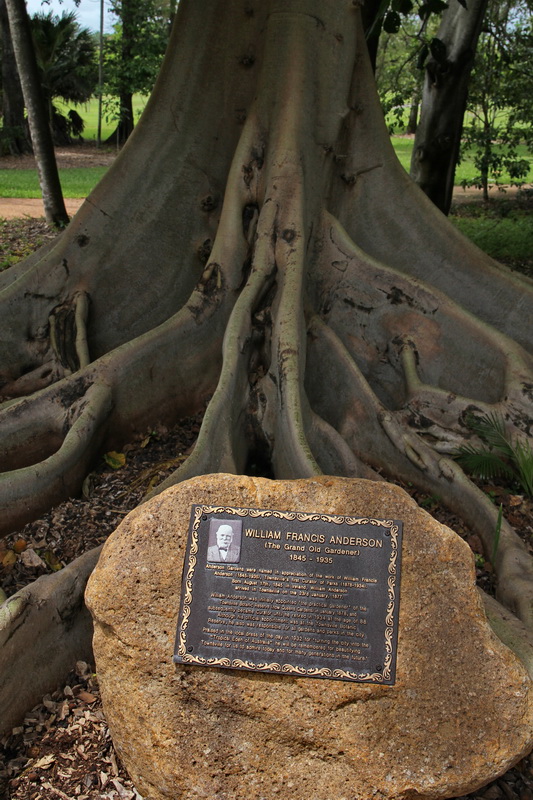 The original Botanic Gardens design was prepared in 1962 by Alan Wilson, a Landscape Architect and Superintendant of Parks, with the plant collection originally laid out in Taxonomic groupings, which have largely survived

The original Queensland Rainforest Section was developed as a joint project between the ‘Society for Growing Australian Plants, Townsville Branch’ and the Parks Department (1989-1991).

On 2 February 2011, Cyclone Yasi battered Townsville for several hours with Category 4 strength winds, resulting in one third of the trees at this site being lost. Over subsequent years the damage has been alleviated by ongoing replanting.